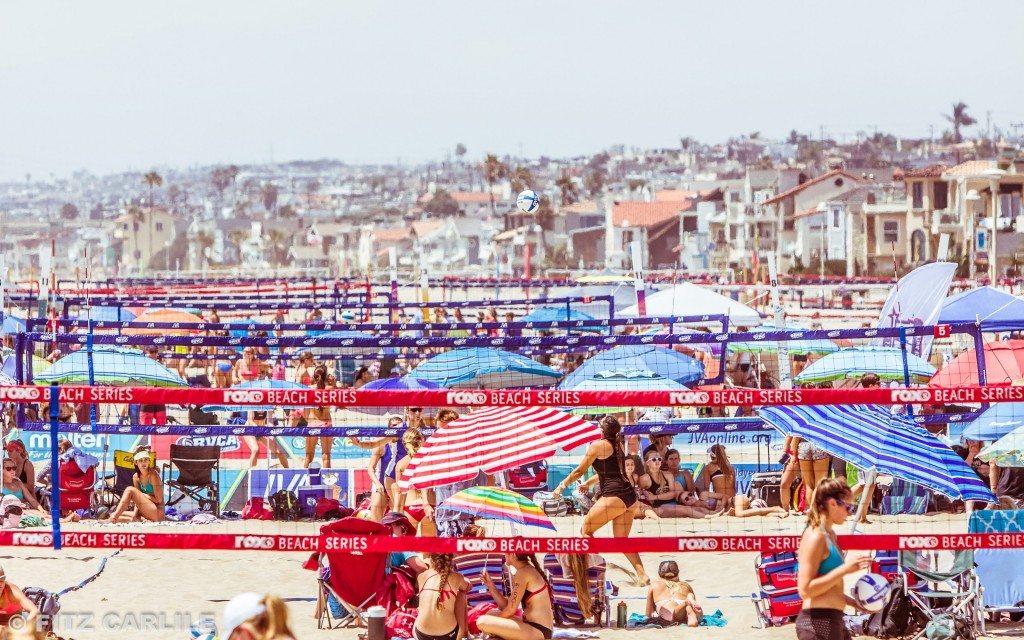 The biggest beach club volleyball tournament just finished their National Championship!  Hosted by the BVCA (Beach Volleyball Clubs of America), this stands to be one of the most competitive tournaments of the summer for four youth divisions: under 12, under 14, under 16, and under 18 years.  This tournament was unlike any other that the sport of beach volleyball has seen. Here’s why: it incorporated a selection of teams from 41 beach volleyball clubs across the nation, and each team is selected by their own club director as a top team from that club; this ensures an incredibly high level of competition.

The tournament was held from July 7th -9th in Hermosa Beach – the mecca of California beach volleyball. There were 25 teams competing in U12 division, 60 teams in U16, 90 teams in U16 and 75 teams in U18. The format consisted of three days of play. Day 1 was pool play; based on performance in pool play, teams in each age group were be split into gold and silver divisions and ranked for playoffs. Playoffs on Days 2 and 3 were single-elimination match play.

The large number of youth teams and high level of competition was bound to attract some college attention – BVCA’s tournament was the perfect opportunity for collegiate recruiting. Over the 3 days there were 19 colleges recruiting at the event. Each player registered with sandrecruits.com, in which players were given a players number to wear during competition. These numbers provided an easy way for college coaches to identify and keep track of athletes during the tournament.

In addition to sandrecruits.com, the tournament was hosted by the JVA (Junior Volleyball Association), and sponsored by Rox, Molten Sockwa, GoRoll, JW Photography, and a few other companies.

Jeff Smith, club director of 692 Beach Volleyball Club in San Diego, and several other beach volleyball club directors came together 4 years ago with the idea that there should be a national tournament for juniors’ beach clubs. Since its early inception, the BVCA has exploded into an association with 150 beach clubs, and counting. Together their mission is to create a community and support system for beach volleyball clubs across America, grow the game, continuously improve their programs, work together to overcome obstacles, and empower young athletes. This BVCA tournament was a testament to the club directors’ success with teams from California, Texas, Nevada, Arizona, North Carolina, Florida, Washington, Ohio, Portland, and Kansas (just to name a few) competing.

Given its astonishing rate of growth and early success, one can expect the BVCA to continue expanding right alongside the sport. Each year gets more competitive – 10 beach clubs did not get in this year because the tournament reached maximum capacity. This stands as the only beach volleyball club national tournament, and will continue to create opportunities for athletes through their clubs. The sport of beach volleyball yields exciting growth in the years to come – and BVCA will be right there to showcase some of the best competition.

For results of the tournament, go to www.beachvolleyballclubs.com